You have a medical condition and you have a doctor by your neighborhood. But still took can not go and get yourself treated. Because it’s simply not allowed. Situation becomes more painful when the sufferer it’s your child and the medical condition coups impair a lifelong disability.
This is the pain the refugee in Pakistan are going through these days. Leaving under miserably per conditions in government refugee camps or their own tent out places, Pakistan at this moment it’s at highest danger zone for polio virus to creep up. Already at number one spot for total number of polio cases, the situation is further aggrieved by taliban`s orders against polio vaccination as a protest against usa drone attacks.
What ever their cause of fight is, no one gives them a right to put lives of small kids at risk of a disease as bad as polio. Pakistan is one of the three countries, sheets.polio eradication has not been successful so even till date. I pray for the small kids and their families, who done how managing the polio vaccination from WHO support but do not want any mark on finger, usually a symbol of successful vaccination, do that takiban people don’t hurt them back at homes.

Night is the new day,

when the thoughts dances

of life and tales

and dancing all night.

A strong sense of anger overtook my personality six months back, when i be a participant in the road rage accident. It was not my fault completely, but i could have avoided that. Force from the back was so strong that my car rammed into the footpath crushing a life.

Accident it was, and was recorded so in the police files. I was allowed to go home after a few introspecting questions. “Clean” the order said. But clean, i was not. My soul had a dent. Screams of dying and blood throwing bruises left a major injury to my psychological self.

I felt like dying. started to hate my self. For a moment my body was numb, not able to recollect where i am. Tears rolled out of my eyes at regular intervals and mom was constantly consoling me that it was not my fault.

How the hunger goes away. How can one live without water. Well, i realised all that in that one month.Once i was on the rooftop, but the senses were missing. “It will only be a injury with fracture if i fall from the 4th floor of the building that i was living at” I said t myself..

Mobile was switched off most of the time. Lying on my bed i stare at nothingness. Fan in its full speed forms a beautiful design, with a translucent circular motions. Its working, the fan that is, but no console. I wouldn’t have mind had i been laid on hot sand as it stopped creating any feeling in me.

I had broken a egg from the nest. I felt like a murderer. I was responsible for everything that was happening. Emptiness had overtaken the senses. Constantly looking upwards in one direction as if waiting for some one to come and tell me, that i was not the one responsible. It was all about fate, and i was just a victim of circumstances.

No body came to console. I slept at what time in night, no body knows. But the red eyes were witness enough to vouch that it was a sleepless night.

Note: Accidents are not always at somebody’s fault. That why they are called accidents and not murder. I was victimized by acute depression after that incidence, and thankfully my parents took me to psychiatrist at the right time. 3 months i had to spend in the Depression Treatment Centre. I am still on medicines, but far more relaxed. Thoughts of suicide did come to my mind, i can not deny that. But support from family and friends helps. We need to identify symptoms of depression and then look at it as any other normal illness. So that it could be treated in time and patient could be relieved of the mental trauma and pain.

This morning was sweaty. No signs of wind around. Day was dusky, unmoved. Everything seem so constant that you could actually count number of leaves on one branch of a tree. One thing differentiating the surround from a 360 degree panoroma shot to a live surrounding were the birds flying. Going to their pursuit of finding food. Venture for survival is what differentiate us all from the dead.

Quarter to 8 am it is not very usual and I see no signs of sun. Day has started, birds no longer coming to sight, and people leaving for their jobs. No sun around, makes me curious about can we live like that. After all it will be a bliss in these hot rising temperatures that no sun around to make us sweat.

It is not England where people are used to see days without sun. I hail from India, and it is summer time, when sun comes as early as 6 am and stays till late evening. Working hard, probably to teach us the value to work hard in order to shine longer.

No sun means relief in hot summer day. But I wonder why I was already missing it. It is something that has become a part of your life. And though we may not see much use of it other than the say light, it is actually the torch bearer to our lives.

A thought than crosses my mind. It is for all those people who touched my life, even a small part of it. I may not have loved you particularly, but your absence will be felt. I thank you to be a part of my story.

Last week when i went to check the site for our ‘ready to move in’ new home i was amazed to find some guests. On the first floor of my house, a family of robins have arrived. And i see a nest with eggs hatched on the end of one rolled up blind. It was a clear view from the entrance from where i could enjoy the entire scene without posing a threat to the birds.

My new guests were busy in collecting leaves, grass and some other stuff to comfort the unborn. Yes, i could see the eggs, four of them, laying there in their white glory. I could see the mother busy collecting food as it won’t be able to leave the nest for longer periods now.  I can see the father, guarding strongly like a soldier against the unforeseen dangers. A blissful feeling.

It was an issue at hand as i was going to shift in here in few days time and that is the time when i might need to use those blinds. Nature does affect our hearts very strongly. I am not particularly a man who keeps pet or birds, but for some reasons i decided to keep them. At Least till the time i could see the last one fly.

I started to feel very caring and curious to see the life taking place. It is an amazing experience to be able to witness the nature’s most amazing blessing, a new life. I collected what ever information i could gather from the internet to keep the nest safe. To do and not to do list made and instructed to every one around.

Robins don’t stay at a place for very long. They will abandon the nest as soon as the children and good enough to fly.Crazy thing which i came to know about robins is if the male member comes to know that its nest has been subject to human intervention or any other danger, it might just abandoned the nest, killing its own sons.

Today when i came for my regular visit, it was a sinking feeling. From the entrance i noticed a cat approaching towards the nest. Robins senior were not around or probably were too frightened to warn the cat. Blinds are not that high to be out of the reach for the cat.

I didn’t had the time to run to the first floor and then scare the cat off. I had to do something in few seconds only. I took a stone decided to take the aim. Not my lucky day for sure, it hit the nest, leaving it unbalanced. The nest took a big swing as my heart comes to my mouth. and then the dreadful happened. One of the birds egg fall off the nest. There was a small sound, like someone has knocked the egg on the frying pan to cook omelette. only that this time it had a life in it. I had killed a life.

Sometimes you take chances in life. Not every time it goes in your favor. I have killed a egg to save the nest.

who has nowhere to move.

waiting to spill out

I looked at the sun

it was in its glory,

the light, it is capable of

but orange, beauty on the ooze

Thoughts have to be controlled,

waiting for the right time

Calmness is an art,

where PEACE it the paper,

we just have to sort 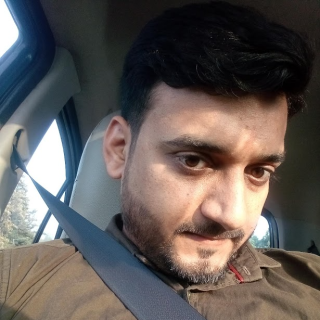